[Disclaimer:  Not a sponsored post and all opinions are 100% my own.]

I have had a long, at times complicated relationship with coffee.  In my early twenties, I used it mostly as fuel to stay awake for ridiculous hours to meet academic deadlines, to fuel mania in studio theaters, and to help me get through finals for classes that ended up being rather inconsequential.  During that time, I had very little standards for coffee other than it should be black and stronger than tar.  Not instant.  Not the trash known as decaf.  And definitely not sweetened.

Later, when I started to allow more appreciation of food and drink, to see them more as an experience rather than just fuel, I would still hold onto my feelings that coffee should be strong and never decaffeinated… but I did start to concede that perhaps a little sweetness was acceptable; though compared to most sweet-coffee-drinkers, my tastes are still rather conservative.  Part of it is preference; the other is that I must be mindful of how much sugar I consume, and coffee is an easy vehicle for overindulgence.

I’d like to make note of a few more factors before we continue:  I’m not really into cow’s milk, and I’m not into hot coffee.  The cow’s milk point is not an ethical argument—hello, dairy is how BP makes his money—it’s simply that I don’t care for the taste and subsequent mouth-feel, though I will make concessions here and there (particularly when it comes to cooking with milk/heavy cream).  For me, cashew milk is king.  As far as hot coffee goes, I usually prefer cold-brewed-coffee which means I usually end up drinking iced coffee.  Even if I order out (Starbucks is my usual go-to for various reasons, the primary being that there is one within walking distance of my house), I’ll still go for an iced coffee, even in the winter.  I really like cold (and strong) coffee.

So when I first saw commercials for International Delight’s One Touch Latte frothing coffee creamer, I didn’t think too much of it.  I don’t usually order a latte when getting coffee out, and I don’t really care for International Delight.  I think their creamers are really sweet, and as I mentioned, I don’t really lean towards sweetness when it comes to my coffee (and if I do, I’m more likely to use a sugar-free syrup to keep my blood sugar in the appropriate place).  In fact, weeks went by, and a whole new commercial debuted before I decided to bring a can home, and even that was entirely by chance.  I had swung through Grocery Outlet after a long day and wanted a little meat-and-cheese-plate snack.  As I wandered down the aisle looking for a cheese or two, I happened upon a display of the One Touch Latte cans, and seeing them offered for a more reasonable price than my usual grocery store, I scooped one up so that BP and I could give it a try! 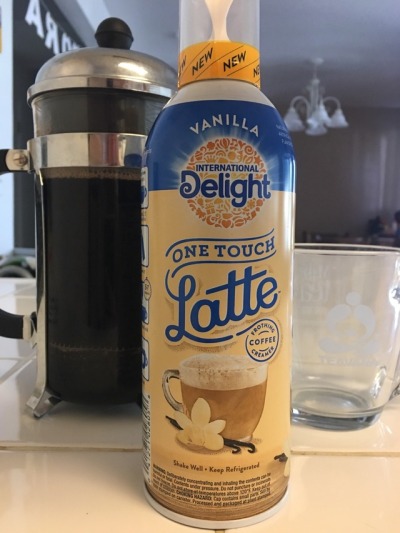 The instructions to make said latte are pretty easy.  After making a cup of coffee and filling your cup 2/3 full, you simply give the can a hearty shake, invert it, and press down on the trigger for about 5-7 seconds.  And presto!  A latte. 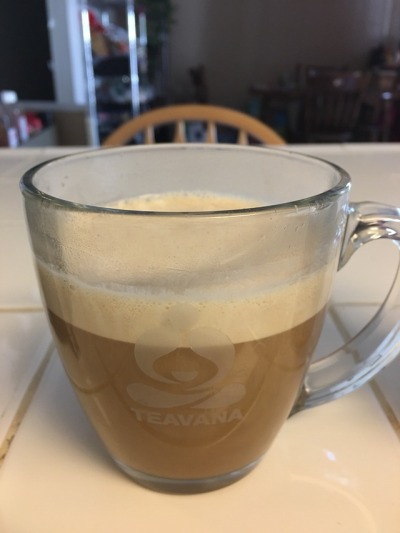 So I did just that!  And well… the experience was… Interesting?  Firstly, it feels just a tad uncomfortable squirting this product in your coffee.  I conservatively filled up my cup only a little more than half-way because all I could picture was spraying scalding hot coffee everywhere, especially with the pressure of this product coming out of the can.  That wasn’t the case though—all of the coffee did remain in the cup, thankfully—but it did make me just a touch nervous before I got the hang of it.  Secondly, the flavor is very weak.  I thought it ended up being the perfect amount of sweetness, but if you’re the type to get a long and complicated, syrup-laden dessert-masquerading-as-coffee from your coffee shop, this isn’t going to be sweet enough for you.

What I did mind were the ingredients, mainly the addition of coconut oil.  I have had a terrible reaction to coconut in the past, so we used to avoid it at all costs in my house.  But I have started to slowly reintroduce it to my kitchen to see if, after enough time, this allergy has lessened.  We’re not going hog-wild by any means because coconut is still gross to me (the smell of it alone makes my lip curl).  But because coconut oil is in A LOT of products, it’s helpful to build up some tolerance to it.  I used to be better at looking at labels, but admittedly it didn’t even occur to me to check to see if coconut oil would be in this product.  It is the third ingredient listed.  Whomp whomp.  I was also really bummed out by the nutritional information.  For best latte results, they recommend a 5-7 second squirt, but a serving size is listed at 2 tablespoons.  If you only had 1 serving, you’re consuming 25 calories, but at the suggested 5-7 seconds, which is the average latte serving, your calories jump up to 120!  I can’t even imagine how one would go about measuring this out precisely anyway; you could probably get pretty close, but I feel like there are a lot of variables at play.  So if you’re recording all of your food/calories (via an app or food diary of sorts), you’re only going to get a close estimation.  This factor wasn’t a huge deal breaker for me, but it could be for some folks.

Final verdict?  If you can find this on sale, go for it.  It’s a fun novelty.  I think, for my household, this is a one time purchase (and thankfully not at full price).  But this is definitely not a must-have-fridge-staple.