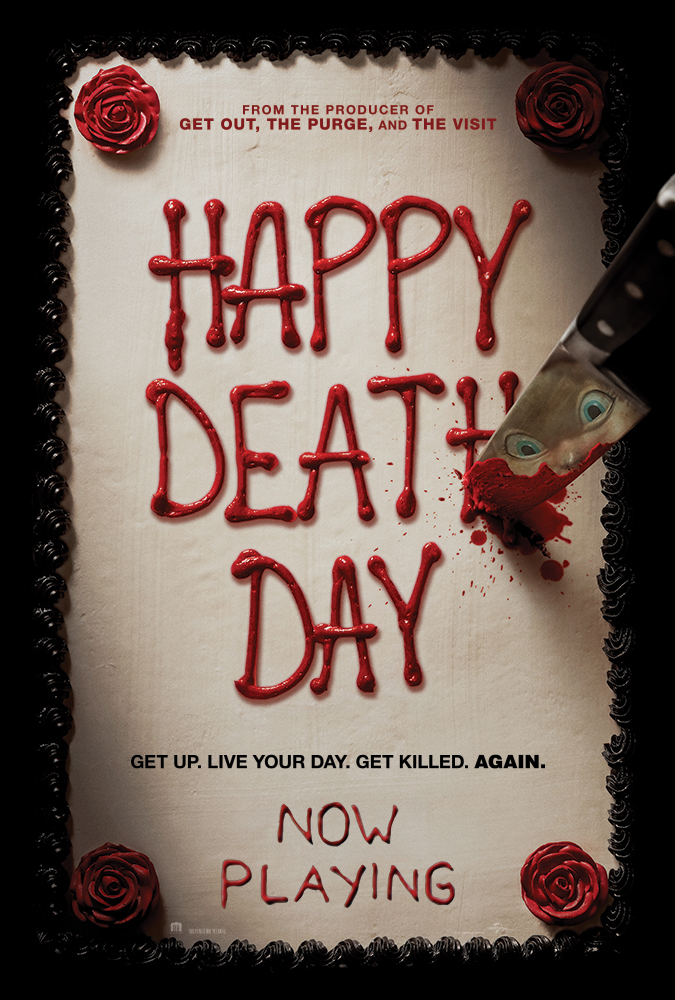 Initial Thoughts:  Go see ‘Happy Death Day.’  If your expectations are reasonable, it’s more than worth the price of admission.  But if you’re looking for an edge-of-your-seat horror, maybe look elsewhere, and save this one for RedBox or a streaming service.

**Spoilers below! Come back after you’ve seen this film!**

It was Friday the 13th, and I found myself on my own without a plan for celebrating this spooky day…  And while I always browse local tattoo shops for the usual ‘Friday the 13th’ specials, something about getting a spur-of-the-moment, somewhat-unplanned tattoo in a kind of cattle call atmosphere doesn’t exactly thrill me.  Being the owner of several tattoos, some of them on the larger side, I’m not against tattoos.  I’m just picky.

Anyway, since BP had to work, I thought I’d take myself out to the movies.  I really love going to the movies, especially by myself.  There’s just something about sitting in the dark, with (hopefully) no distractions, in a room with a bunch of strangers all sharing the same journey that is just so magical to me!

I was especially excited to go see ‘Happy Death Day.’  Not because I thought it was going to blow me away, that it was reinventing the wheel in this kind of repetitive-action genre, but because it simply looked like a fun thriller.  This summer was a huge bummer, mainstream movie-wise, but it looks like things are picking up for coming holiday season.

If you’re not familiar with ‘Happy Death Day,’ it’s a horror/thriller in the vein of the ‘Groundhog Day’ model, an idea driven home right off the bat by a constant stop and restart of the Universal logo.  ‘Happy Death Day’ features a college girl named Tree (Jessica Rothe), who relives the day of her murder with both its unexceptional details and terrifying end until she discovers her killer’s identity.  But rather than the serious tone this movie could take, the whole thing ends up really silly-feeling, in its attempt to be rather tongue-in-cheek.  The ‘Mean Girls’ vibe is alive and well, as none of the female characters are particularly likable and an integral part to the mystery-solving involves the lead character realizing the error of her ways and ultimately becoming a better person.

Despite having a lot of fun watching this—I particularly enjoyed Jessica Rothe’s performance once she shed director Christopher Landon’s obvious “sorority bitch” two-dimensional box in the first ten minutes or so—there was plenty to chew on, complaint-wise.  Firstly, though there are plenty of ridiculous mascots in the college sport world, making the mascot a baby was clearly just a ploy to use the somewhat unsettling baby mask as the killer’s disguise.  Seriously, what kind of mascot is a baby?  Secondly, this movie was clearly written by a man.  Tree initially has about as much depth as a puddle:  she’s a sorority girl who sleeps around, including with her professor, gets drunk, is catty with her sorority sisters/frenemies.  You know, your typical behavior as a college girl.  I’m honestly surprised we were spared a getting-ready montage and/or a pillow fight scene.  And while ‘Happy Death Day’ was self-aware enough to acknowledge its ‘Groundhog Day’ model (even mentioning the film by name towards the end of the film), its occasional ‘winkwinknudgenudge’ moments were kind of insulting in that they felt lazy and pretty noncommittal.  I couldn’t tell if this was a film that was trying too hard or not hard enough, and I’m not sure even the director (and actors) could tell you which direction they’re leaning.  This is most evident in the marketing of this movie.  The trailer made it seem like more of a horror movie, and yet the PG-13 rating, the flat and unmemorable jump-scares, and the noticeable absence of real gore lend itself more to a thriller than a horror movie.  Was Landon trying to make a more accessible film for a broader audience?  If not, he should adopt this story if anyone asks him about this movie in the future.

I do want to give credit to Jessica Rothe though.  Despite what feels like two-dimensional direction in the beginning of this film, Rothe quickly commits to the physical demand of this role as the violence and action increases.  Her frustration is multifaceted as she relives each day, feeling both closer and farther to understanding her situation and determining the identity of her killer.  I won’t spoil the reveal here, because I do think this is a fun watch, especially if you’re looking for a fun pre-Halloween flick to indulge in.  But I will say that despite the obvious misdirection at times (Tree is pretty awful to nearly everyone around her, making her list of potential killers a long one to wade through), the identity of the killer is pretty easy to nail-down early on even if the motive seems pretty stupid (and also a little insulting/misogynistic; thanks, Male Writer).